Step 5:    Definition of the Class

About Documentation Section (that is, Step 1:)

The documentation section comprises a set of comment lines giving the name of the program, the author name and other
details etc.,

1.    The comment statement is used to identify the purpose of the program

2.    Usually specified at the start of a program. (That is, to give about program details)

(a) The single line comments begin with /* and end at the end of the line with */
(b) Single-line comments are especially useful when short, line-by-line descriptions are needed.

Note:    There must be no spaces between the asterisk and the slash.

(a) The single line comments begin with /* and end at the end of the line.
(b) Single-line comments are especially useful when short, line-by-line descriptions are needed.

5.    This statement may or may not be present in the program as per the programmers wish.

7.    Comment statements may be included in between the program to understand each line of the program.

8.    Comments are added at each end of the statement in order to understand the overall program organisation easily.

9.    Comments would greatly help in maintaining the program.

10.  It is a good programming practice to include comment statements in a program.      /* important point */

11. Comments should not appear in the middle of a keyword or identifier.

12. In real applications, comments generally explain how some part of the program works or what a specific feature does.

(a)    This line begins the main() method
(b)    This is the line at which the program will begin executing.
(c)    All Java applications begin execution by calling main().

Important Note: -    main() method must be declared as public, since it must be called by code outside of its class when the
program is started.

Important Note: -     When you begin creating applets - Java programs that are embedded in Web browsers - you won't use
main() method at all, since the Web browser uses a different means of starting the execution of applets.

Any information that you need to pass to a method is received by variables specified within the set of parentheses that
follow the name of the method. These variables are called parameters. In main() method, only one parameter is used.

Important Note: -     If there no parameters required for a given method, you still need to include the empty parentheses.

In Java a string is a sequence of characters. But, unlike many other languages that implement strings as character arrays.
Java implements strings as objects of type String.

String args[] declares a parameter named args
The parameter args, which is an array of instances of the class String

Objects of type String store character strings. In this case, args[] receives any command-line arguments present when the
program is started. 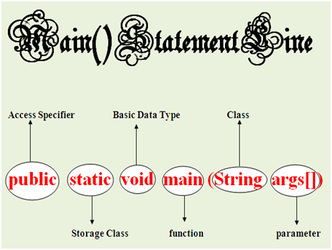